A Decade of Lucid Dreams 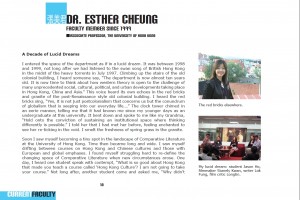 I entered the space of the department as if in a lucid dream. It was between 1998 and 1999, not long after we had listened to the swan song of British Hong Kong in the midst of the heavy torrents in July 1997. Climbing up the stairs of the old colonial building, I heard someone say, “The department is now almost ten years old. It is now time to think about how western theory is open to the challenge of many unprecedented social, cultural, political, and urban developments taking place in Hong Kong, China and Asia.” This voice heard its own echoes in the red bricks and granite of the post-Renaissance style old colonial building. I heard the red bricks sing, “Yes, it is not just postcolonialism that concerns us but the conundrum of globalism that is seeping into our everyday life….” The clock tower chimed in an eerie manner, telling me that it had known me since my younger days as an undergraduate at this university. It bent down and spoke to me like my Grandma, “Hold onto the conviction of sustaining an institutional space where thinking differently is possible.” I told her that I had met her before, feeling enchanted to see her re-ticking in the void. I smelt the freshness of spring grass in the granite.

Soon I saw myself becoming a tiny spot in the landscape of Comparative Literature at the University of Hong Kong. Time then became long and wide. I saw myself drifting between courses on Hong Kong and Chinese cultures and those with European and global emphases. I found myself struggling hard to re-define the changing space of Comparative Literature when new circumstances arose. One day, I heard one student speak with contempt, “What is so good about Hong Kong that made you teach a course called ‘Hong Kong Culture’? I am not going to take your course.” Not long after, another student came and asked me, “Why didn’t you talk more about Hong Kong in your course ‘The City as Cultural Text’? We are more interested in Hong Kong. Why do we have to know about Paris in the 19th century and Berlin in the 1920s?” Soon from nowhere, a group of students stepped up and said, “If we do not compare literatures only, are we not provoked to think about culture and history through connections, disjunctures, contradictions and analogies?” I saw myself navigating through my own limitations, other people’s suspicions and prejudices, and my students’ aspirations.

Many years later, two students came to my office with a little gift package. They said the package contained their best wishes for me and the department. I opened it and found two red paper cranes. They said that the paper cranes were for those in convalescence. One of them contains this message: “It is hard to set something up but even harder to allow it to grow organically.” The other reads like this: “Hope is imagination for a real and concrete state which must be struggled for politically.”

My lucid dreams go on while the paper cranes spread their wings. Time hastens to end itself but the clock in the Main Building begins to chime resistantly, “This year is the 20th anniversary of Comparative Literature at the University of Hong Kong. Time will go on. You are not alone.” I see myself becoming a vanishing spot in the vast landscape, disappearing into the sky with the two soaring paper cranes. They say the red paper cranes look like phoenixes.

In an enchanted state, I quietly whisper to the indefinable void ahead of me: I hope that I am not alone.

(Published in 20th Anniversary of the Department of Comparative Literature, HKU)