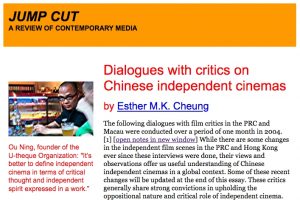 The following dialogues with film critics in the PRC and Macau were conducted over a period of one month in 2004. [1] [open notes in new window] While there are some changes in the independent film scenes in the PRC and Hong Kong ever since these interviews were done, their views and observations offer us useful understanding of Chinese independent cinemas in a global context.