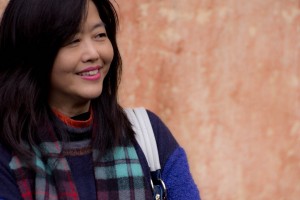 Colleagues in the
Department of Comparative Literature
and Hong Kong Studies

Esteemed scholar and award-winning educator, Esther M.K. Cheung passed away on February 9, 2015, in Hong Kong. She was a pioneering figure in the field of Hong Kong studies and an important force in research on Hong Kong film, literature, and cultural studies. A respected poet and essayist, Dr. Cheung was also a “public intellectual,” known for her poetic evocations of Hong Kong as well as her insights into contemporary cultural phenomena. She chaired the Department of Comparative Literature for many eventful years and was active in professional circles in Hong Kong and internationally, including the Centre for the Study of Globalization and Cultures, which she headed.

Dr. Cheung was a passionate teacher who loved the students who walked into her classes. She taught exciting and timely material on Hong Kong cultural studies, contemporary Chinese fiction and film, critiques of modernity and postmodernity, as well as visual and urban cultures of globalization. Undergraduate students in the department often remember her classes years after they graduate, and her numerous postgraduate students continue to feel her influence on their own scholarship. Dr. Cheung’s contributions as a teacher and mentor have shaped young scholars who write and publish on various topics within Hong Kong literature and film, East Asian cinema, gender and sexuality, ecocriticism, the medical humanities, and cultural studies more broadly.

Dr. Cheung was also dedicated to experiential learning practices at HKU. She pioneered the filmmaker-in-residence scheme which was first set up in the Department of Comparative Literature and later adopted by the University as the University Artists Scheme (UAS) hosted by the Faculty of Arts. To develop internship and experiential learning opportunities for our students, Dr. Cheung worked with eminent personalities in Hong Kong’s cultural scene. Her past collaborators included the cultural critic Dr. Ma Ka Fai; P. K. Leung, one of Hong Kong’s most-loved poets; prominent author Natalia Chan; independent filmmaker Vincent Chui; and still many others. In 2011, she was the recipient of the Outstanding Teaching Award (OTA) at the University of Hong Kong.

Dr. Cheung will be remembered for her enormous contribution to Hong Kong cinema studies. With an eye for independent visions, an ear for the Cantonese vernacular, and a commitment to local cinema beyond commercial action, she celebrated New Wave filmmakers such as Ann Hui, lauded “Second Wave” luminaries such as Wong Kar-wai and Stanley Kwan, and championed the emerging independent productions of Fruit Chan, Evans Chan, Tammy Cheung, and Vincent Chui. Dr. Cheung showed enormous sensitivity in her analysis of auteurs such as Peter Chan as well, and she appreciated the artistic mastery and cosmopolitan perspective of Hong Kong filmmakers from the experimental periphery to the commercial mainstream. Her edited/co-edited anthologies, Between Home and World: A Reader in Hong Kong Cinema (Oxford UP), Hong Kong Screenscapes: From the New Wave to the Digital Edge (HKUP), The Visual Memories of Stanley Kwan (in Chinese, Joint Publishing), and the Blackwell Companion to Hong Kong Cinema (in press) point to her substantial contribution to the growing literature on Hong Kong cinema. Her essays in these volumes—as well as her contributions to other books and journals on Hong Kong film—testify to her ability to honestly get at the heart of the territory’s dreams, desires, and delusions. Her volume on Fruit Chan’s Made in Hong Kong (HKUP) exemplifies her unique voice in the field as she writes eloquently on the desperate lives of neglected youth in the impoverished public housing estates of Hong Kong. Although she claimed to be frightened by horror films, she wrote often about the haunted cityscapes of the former colony and the ghosts lingering in the Special Administrative Region after the change in sovereignty in 1997. Taken as a whole, her research on Hong Kong cinema has elevated scholarly understanding of questions of class, gender, generation, and local identity within the surreal dreamscape of her beloved city.

Dr. Cheung was a serious voice of international recognition in the field of comparative literature and cultural studies. Her publications, innovative and covering an impressive range of texts, are both ground-breaking and utterly dependable. She had an almost encyclopedic grasp of various forms of Hong Kong literature and culture. She was particularly sensitive to and knowledgeable about the questions of identity and urbanity that have emerged in the context of global modernity. Besides the central topic of Hong Kong cinema, her work on literary study has also drawn international attention. While there are many prolific researchers in the field of Hong Kong cultural studies, few are willing or have the ability to focus on literature. Dr. Cheung not only chose to focus on literature and film, but also discovered new ways of integrating cultural critique and creative writing. Her recent collection of Chinese prose The Uncanny on the Frame, among others, offers fascinating insights on cultural and social issues in Hong Kong. Together, her creative outputs serve as an excellent example of how to make academic studies accessible to a wider community. Dr. Cheung’s work, astutely cosmopolitan and interdisciplinary in perspective, has defined and developed a vibrant field of cross-cultural inquiries in not only Hong Kong but also the world at large.
The entire campus community mourns her loss, and her presence will be sorely missed. She has left us too soon.