The Turbulent Voyages of Vengeance 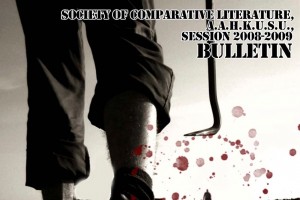 When you leaf through the following pages of this year’s Comparative Literature Bulletin, you will see how the spirit of revenge has gone through many forms of metamorphosis. From the ancient Hellenic view of divine retribution to contemporary popular modes of vengeance, stories of revenge engage their readers/viewers as much as they consume their creators. Acts of revenge probably embody the strongest emotions ever known to humans; desires of revenge produce a complex matrix of affects where envy, jealousy, indignation, hatred, and love are intertwined with each other.

Central to nearly all tales of revenge are three interrelated issues: matters of love (and hatred), the need for equilibrium and justice, and an ethics of alterity. The classical Greek mythology of Nemesis unfolds various stories of the goddess’ retribution against evil deeds in order to “right” the wrong. Nemesis is responsible for balancing right and wrong, sadness and happiness, evils and fortunes. No wonder her name in Greek means a “dispenser of dues.” As the energy of the avenging agent is always in excess of what is called for, acts of redressing the wrong sometimes inflict greater suffering upon the avenged than one deserves. The controversy thus lies in how violent acts of vengeance are carried out in the name of justice and on behalf of the other. In some cases, the balance appears to be so off-balanced that the only means of depicting revenge is the absurdist mode. Contemporary Korean filmmaker Park Chan-wook (朴贊郁) seems to think similarly. In a dialogue session organized by our department last week (Oct 15, 2009), Park explains that the use of dark humour in his films (e.g. “The Vengeance Trilogy”) in aestheticizing revengeful violence demonstrates a reality darker than the dark reality. What he said reminds me of Friedrich Schiller’s straightforward remark on the futility of revenge: “Revenge is barren of itself: it is the dreadful food it feeds on; its delight is murder, and its end is despair.” What is more barren than the revengeful landscape of humour and laughter where no happy ending can be pursued?

The fact that desires for and acts of vengeance are intricately associated with other people is intriguing. When one deals with one’s “nemesis,” does one start to engage in a productive, if not reconciliatory, relationship with the other? In her famous “The Laugh of the Medusa,” Helene Cixous asserts that “there always remains in woman that force which produces/is produced by the other — in particular, the other woman… There is hidden and always ready in woman the source, the locus for the other.” Cixous’ conviction in retrieving female vitality and the possibility of an ethics of alterity through a feminist critique has featured the heyday of French Feminism. It has also shed light on our present musing over revenge. To be able to discover our dialectical relationship with the other does not guarantee the abandonment of any revengeful plot. However, when one discovers that one’s own “nemesis” could be oneself, will one be treading a different path than a voyage of vengeance? Will we smile agreeably with Julia Kristeva who remarkably argues that “the strange [is] within us”? Is dealing with one’s nemesis the beginning of a journey that is interior to one’s psyche? Does it create for us the possibility of living a history of trauma and suffering different from what revenge has inspired us?

From the prehistoric matrilineal myths in various world civilizations to contemporary depictions of male vengeance in Hong Kong and Hollywood cinemas, the chaotic and turbulent seas of vengeance have been theatres of desire where avenging acts are staged. Turn over to the next page — you will begin to catch some fascinating glimpses of the tropes of revenge in a diversity of contexts and cultural texts. Enjoy reading!

(Originally published in Revenge – Beyond the Slings and Arrows, Society of Comparative Literature Bulletin 2008-2009.)