The Punch Line in Culture 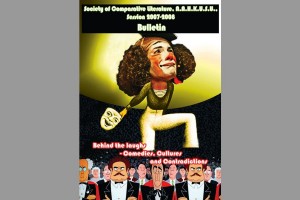 Comedy culture is an essential part of any society, just as laughter is an essential part of our everyday life. We laugh during festive times, we laugh on our way to work. We laugh at home, we laugh in the Cultural Centre. We consume so as to laugh, we laugh so as to be consumed. We laugh when the jester falters, we laugh when the festoon cries. We desire the punch line, we forget the punch line. We laugh to “death,” we laugh to be reborn. The comic sees its power in conflicts, incongruities, absurdities, ironic twists and opposites.

With the cinematic trope, Charlie Chaplin once articulated comedy from a temporal point of view, “Life is a tragedy when seen in close-up, but a comedy in a long-shot.” No doubt time changes our perspective of what tragedy and comedy mean. In our own blunders and in life’s many hardships, however, do we not visualize the tragic and the comic as an indestructible pair? Is life not a photograph of double exposure with one image superimposed upon another? Does the tragic not see its own ghostly other in the comic, and vice versa?

The classical notions of both comedy and tragedy in the western tradition have been framed in a conflictual mode of thinking. Northrop Frye might have theorized comedy in a controversial manner by suggesting that comedy is defined by the co-presence of two opposing forces, namely a “Society of Youth” vis-à-vis a “Society of the Old.”[1] Nonetheless, he is right to suggest that the tragic mode of thinking is inherent in many comic juxtapositions. Just as tragicomedy always ends with a happy ending despite its stark seriousness before the denouement, there exist so many macabre, deadly and diabolic implications in the evocation of laughter. We are not surprised to know that cases of “fatal hilarity” can be dated back to the time of Ancient Greece.

Interesting works are always provocative and controversial. Sigmund Freud’s three ground-breaking psychoanalytical studies, Jokes and their Relation to the Unconscious (1905), Interpretation of Dreams (1900), and Psychopathology of Everyday Life (1901), in one way or another, express Freud’s tragic vision of life.[2] It is a tragic view of human civilization that invites debates. The ego, in Freud’s analysis, acts up against the superego in a comic agon/conflict. The comic is not confined to jokes and humour but the case of how humour operates sheds interesting light on the comic. In his short piece “Humour,” Freud discovers the “victorious assertion of the ego’s invulnerability.” Humour signifies the ego’s resistance against death and destruction; it is rebellious. It demonstrates the fundamental conflict between the social and the individual. It dramatizes the agon through the use of language. It asserts the ego’s superiority through the process of infantalization. Are we not struck by this little anecdote about a criminal awaiting execution? Freud amuses us with the following tale:

Let us suppose that the criminal who was being led to execution on Monday had said, “It doesn’t worry me. What does it matter, after all, if a fellow like me is hanged? The world won’t come to an end because of it.”[3]

In one’s own narcissistic assertion through humour, one expresses a display of magnificent superiority with an intent to “evade the compulsion to suffer.”[4] No wonder humour is not unlike the fetish in its comic disposition and its evasion of death, nor is it too different from the slip of the tongue when what is repressed returns to revisit us.

Freud is instructive in his analysis of the comic and its relation to psychopathology. However, comedy culture cannot be confined to psychoanalysis only. Following Freud, one may claim that comedy culture finds its genesis in the human needs for resisting death and destruction. And yet, beyond the primordial and the sexual, the comic procreates its prolific afterlife in philosophy, dramatic theory, literature, film and contemporary consumer culture. Laughter cannot be universal and many jokes are culturally specific. While Samuel Beckett’s narrator in Murphy inspires us by saying, “In the beginning was the pun,” we are struck by the way in which the traveling path of language renders the untranslatability of word play. In connection with this, this is also the reason why some racist slurs, dirty jokes and gendered euphemisms play with culturally specific knowledge or what Roland Barthes would call “cognitive connotation.”[5] In the Hong Kong context, Dayo Chi-wah Wong’s witty use of Cantonese puns in his stand-up comedies has made him one of the best local comedians. His critical use of laughter surely has enhanced the importance of comic culture. Nevertheless, as his fame can never be up to par with any Hong Kong-turned-global action icons, for example, Jackie Chan and Jet Li, we have to admit that laughter can never be universal and global.

Comedy culture involves a process of exchange which is popularized by commercialism. In the best scenario, it enacts an experience of gift-giving through entertainment. No doubt, like every writer, a comedian desires an echo and requires a listener. How many times have teachers been frustrated by their inability to arouse laughter in their students when an intended joke does not work? Comedy culture is not always about what is anti-social but about echo and integration. French Philosopher Henri Bergson might not have thought of a rebuttal to Freud when he wrote his classic text: “Laughter: An Essay on the Meaning of the Comic” (1921) but his exposition of the social function of laughter offers a different view from Freudian psychoanalysis. He sees the connection between laughter and drama:

Society is a product of a kind of evolution: for one reason or another, the history of humankind seems to lead towards an increasingly peaceful social life by controlling our antisocial urges. The point of drama is to let us have a glimpse inside of ourselves, of what we would be if it wasn’t for society, of our hidden nature or nature in hiding. Comedy, on the other hand, serves society by pointing out our antisocial tendencies and inviting us to laugh at them, thus encouraging us to correct them.[6]

It is undeniable that this Bergonian view does not explain every comic culture but it provides us a way of seeing laughter in some social contexts. With this view, we can also begin to understand why there are so many films produced with a comic vision during festive times, such as Christmas and the Chinese New Year. Are they not cultural texts which aim to integrate the individual into the society? Some may consider this view conservative and prefer to be inspired by Mikhail Bahktin who has told us in “Rabelais and His World” that the carnivalesque and the grotesque would always hopefully bring about an overturning of established power structures,[7] no matter how temporary that may be. The comic does generate struggle, challenge, and criticism. With such complexity, one can surely explore a fantastic world of contention through the comic and explicate a politics, aesthetics and ethics of laughter.

Consider this amazing array of comic genres: comic films, tragic-comedy, stand-up comedy, satirical commentary, romantic comedy, comic strips, jokes, rap talk, and what have you. And this fabulous diversity of comic performers across times and cultures: Do Do Cheng, Charlie Chaplin, Stephen Sing-chi Chow, Billy Crystal, Michael Hui, Robert Di Niro, Woody Allen, Dayo Chi-wah Wong, Sandra Ng, and many more. The parodic, the carnivalesque, the grotesque, the hyperbolic, the litotic, the obscene, the bawdy, the surreal, the anthropomorphic and the absurd — all constitute a world of the comic within and beyond despair.

It is supposed that every joke has a punch line; it is supposed that every comic text has a denouement where the agon emerges. Nevertheless, have we not heard of the “shaggy dog” tale where the joke seems to be never-ending and the punch line postpones its arrival? The implication in the suspense of the punch line is thrilling. Like the shaggy dog tales, comic culture keeps our curiosity going and intrigues us with the art of joke-telling. It places us in the moment of anticipation to contemplate a world of becoming and a space of the unknown, as it were, if not always a realm of hope. There are many jokes that I do not like and some that I cannot understand, but this one has fascinated me even up to now — five years after her death.

On an ordinary wintry night, a few months after my mother’s death, I did not realize that I was still in the mourning for her until I had this comic-tragic dream. I dreamed of myself chatting cheerfully with my friends. When I was about to finish telling them a joke, comic-tragically I forgot what the punch line was. In my reverie, I saw her sitting quietly beside my bed observing me in great frustration. Immediately I woke up, sobbing fiercely. This is a fascinating anecdote even in this moment of retelling. The postponement of the punch line, or in my case, the temporary loss of the punch line, intrigues me to a great extent. Our sentiments in mourning may find their fantastical expressions in a comic transformation. The punch line is an enigma, somewhat like a “writerly text” in Barthes’ sense, awaiting our decipherment. Up to now, I am still bewildered by this enigma but fascinated by the power of the comic-tragic. While its presence affirms the universal urge for joke-telling, its suspension also allows individuals to search for personal and culturally specific meaning in their existential crises. To me, the greatest and most interesting comic texts are always “stories of the kairos” — the moment with which only you yourself can come to grips.

M. Bakhtin once wrote quoting from Alexander Herzen, “It would be extremely interesting to write the history of laughter.” It has been a great pleasure to finish writing a prologue of the comic which unfolds the many chapters in this book of laughter. Wish you a great time reading them in and beyond the laughs.

(Originally published in Behind the Laughs: Comedies, Cultures, and Contradictions, Society of Comparative Literature Bulletin 2007-2008.)