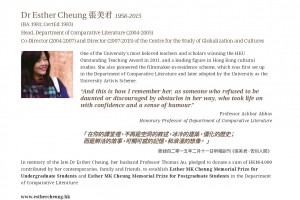 One of the University’s most beloved teachers and scholars winning the HKU Outstanding Teaching Award in 2011, and a leading figure in Hong Kong cultural studies. She also pioneered the filmmaker-in-residence scheme, which was first set up in the Department of Comparative Literature and later adopted by the University as the University Artists Scheme.

“And this is how I remember her, as someone who refused to be daunted or discouraged by obstacles in her way, who took life on with confidence and a sense of humour.”
Professor Ackbar Abbas
Honorary Professor of Department of Comparative Literature